It took all of my spare time this weekend, but I got the PCB printed and populated. It looks pretty good: 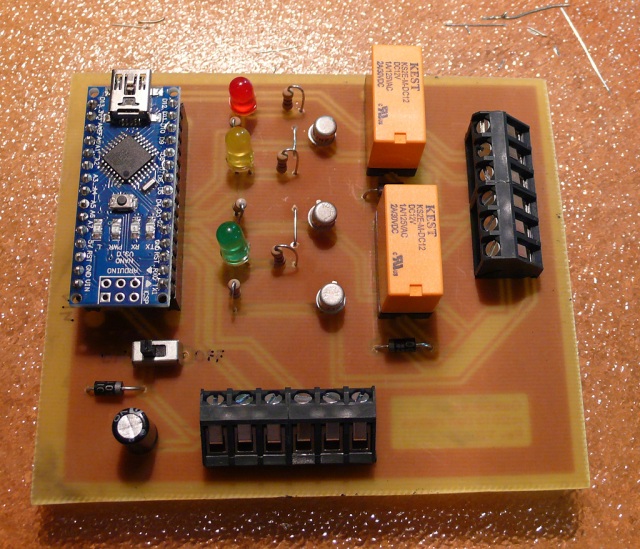 It’s getting late so I won’t test it until tomorrow. Hopefully there are no really bone-headed mistakes.

My first attempt at the board failed miserably. It etched OK, but when I started trying to solder components, I was having various problems such as pads literally melting off the board, and traces breaking. I think after I had 4 messed up traces I gave up, very unhappily so.

I started thinking about it and I had the same problem with pads separating from the board due to heat before and I had been using .02″ traces. CRUD! I had built this board with .02″ traces for reasons I couldn’t say because my notes to myself say USE .03″ traces! Dang it.

So today I started over. I redesigned the board with wider traces and clearances. I then etched two of them JUST IN CASE. That is now part of my notes as well. If I have the materials available, just build a spare. It takes about 3 hours to go through the etching process.

This time I had no more trouble soldering the board than usual (my technique is just horrible – I really need to take a class or something).  I also remembered to use a flux pen on the pads this time and that seems to have helped a bit as well.

On the plus side, my toner transfer process is working fantastically. I have had absolutely no problems transferring toner from paper to copper and etching. I even figured out a little more about balancing oxygen and acid during the process this time and updated my notes accordingly.

Here are some pics of the board with .02″ traces, then the two with .03″. You can barely see the difference, but when it comes time to solder components on, it makes a big difference.

This entry was posted in c-arduino, Gate Sensor. Bookmark the permalink.