When I moved into this house 9 years ago, one room in the basement became the ‘junk room’ where stuff I just didn’t know what to do with was stored after I moved. And so for the next 9 years it has been filled with junk. Last year when I got my 3D printer I had no place to use it, so I shoehorned it into this room. 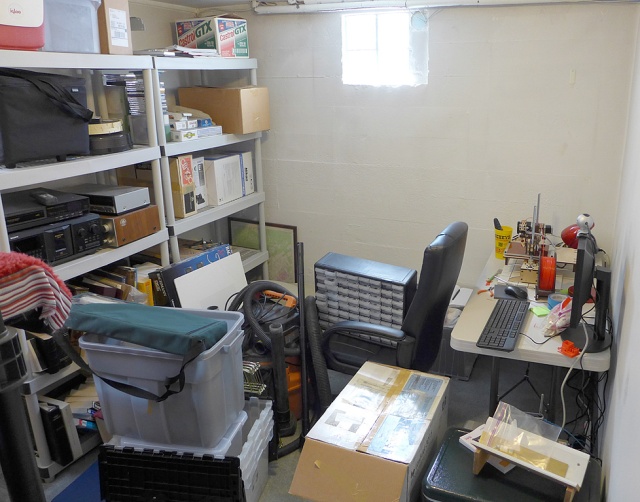 I have always wanted a decent electronics workbench and since I’ve been regularly working on electronic projects the past couple of years I figured it was time to get serious.

So LAST SUMMER I began. However, to build a bench in this room was going to require cleaning out the junk room first. Some stuff I could toss, but much of it needed to stay. So I started refinishing some of the other utility rooms in my basement so I could reorganize all of the messes down there.

By last fall I had finished my ‘server’ room where I kept my various servers, and other stuff I could not get rid of. I moved on to the furnace room where I had to stop because I found the cinder blocks had some water damage and I would have to wait until spring to fix.

Earlier this summer I started work again and finished the furnace room. Finally I was able to get everything out of the junk room and begin. 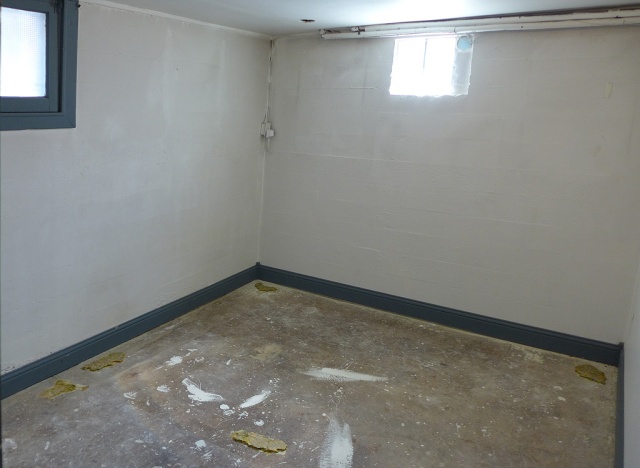 I’ve ‘redone’ enough of this house that much of this project was a no brainer. However, when redoing the floor I decided I wanted a hard floor that was light colored so I could find dropped parts quickly.

I choose Trafficmaster Allure Light Bamboo. This is a vinyl flooring material installed in planks. The edges have an adhesive so once installed the entire floor ‘floats’ that is it is not attached to the floor below or the walls. One test I made on the test sample was to put acetone on it since that is the worst chemical I seem to work with. Left to sit for about 30 secs and then wiped off, I saw no damage.

If I had it to do again, I probably wouldn’t use this flooring material. Even though I applied it EXACTLY as recommended the adhesive wasn’t perfect. I had to go back and pull up some of the planks and heat the adhesive with a hair blower to get it to stick. In a 2 places I resorted to super glue.

The other problem is you get only one chance to align the planks. If you are a little off it is going to be bad as the adhesive will get ripped off the plank if you try to separate them. For some reason I constantly had trouble getting the first plank of each row exactly where it needed to be so they don’t butt up against each other as tightly as I would like. Probably not a problem to the non-OCD crowd, but I don’t like it (no one that has seen the floor has mentioned my obvious flaws though).

By early September the room was ready:

While working on the room, I looked at some books and a lot of websites trying to decide how to design a workbench and I tried to decide what I would want to place on the bench to make sure it would be as useful as possible. One really good source was the EEVBlog. Dave pointed out that his home workbench has lots of room under it for bins. I’m going to have to re-store at least some of the junk I pulled out of this room, so I made sure I could put bins and banker boxes under the bench.

I’ve used Sketchup8 for designing some other wood projects, so I decided to use it to design the work bench. After plenty of trial and error I ended up with this: 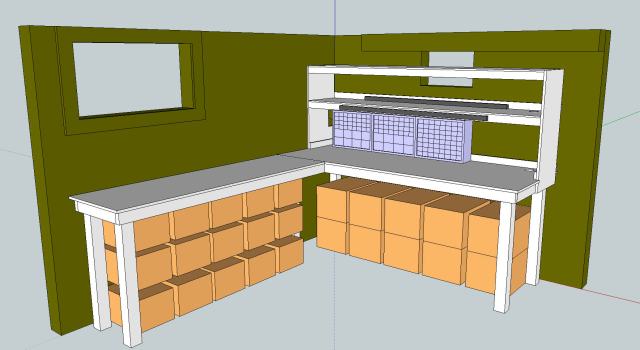 The workbenches I’ve seen have a shelf for test equipment. So I included that and another shelf above that for bulky part storage. Besides the test equipment, I would also be putting my old ‘lab’ pc in which I use to drive the 3D printer.

I already had one akro-mils storage cabinet but I figured I would need more storage so I added another two. Besides being able to store bins under the bench, I wanted the height to allow me to easily work standing. For me, that required the bench be at about belly-button level. Further, I wanted a stool that would be such that I could work sitting but fairly low so when working on small pieces I can get up really close.

The other thing I wanted was a lot of power receptacles. I only have 15A feeding the room and I don’t expect to be able to run a lot simultaneously, but at least I don’t have to keep swapping power cords on a small power strip. I decided on two 5′ triplite strips with 20 receptacles each. Nice!

Woodworking is not my forte and I was building something of my own design. I expected problems. For the most part, the bench build went OK. My biggest mistake was reading 1’5″ and thinking it was 15″. This set me back a day but didn’t waste too much lumber. Lesson learned. From now on all future plans will be in inches only.

The bench was quite large at 8’x3′ for the main bench and 7×2 for the L. I built it with lag bolts so it could be disassembled and moved down to the basement.

I also took the time to learn to install laminate. There are plenty of good videos on youtube and basic white laminate is cheap ($40 for 8×4). I went with white to make it easier to see little parts. Man is it a pain getting older.

Once the bench was in the basement a solidly assembled, it was too jiggly. I wasn’t surprised as I was leaving leg braces for last. I put on braces but there was still too much motion.

I had used furniture levelers initially (drill holes in the 4×4, put in a stop nut, and screw the leveler into the stop nut). Seemed like a good idea but they introduced a bit of wiggle. So I got those out and just put the legs on felt pads (after properly leveling). Between the braces and the felt, the motion is small enough I don’t think I will need to fasten the bench to the wall. I really don’t want to do that since both walls are cinder block.

Once it was all done I decided to reward myself. I have had a B&K power supply and Rignol Oscilloscope on my amazon wish list for well over a year. I purchased those so my old HP oscilloscope and power supply are now just for backup.

Here is the final result:

It will probably never be this clean again. But that is OK because now my office desk won’t have junk all over it for weeks on end.

For the most part, this design worked well for me. I still needed more room for small parts (too big for the component bins) such as RPI and Arduino accessories. I purchased card board bins and installed 2 racks above the whiteboard.

Probably the only thing I would do different would be to make the “hutch” shelves a little wider. Maybe. I purchased an old spectrum analyzer that is just too long to fit on those shelves.

The laminate top was well worth the extra effort. It still looks new.

This entry was posted in c-wood and tagged Workbench Build. Bookmark the permalink.