In the early 80’s I stumbled across a Plano 757 tackle box and purchased it to store my small assortment of electronic tools and parts. It quickly ended up at my office where I was constantly having to make cable ends for RS-232 equipment or crimp RJ-11 and RJ45 connectors for LAN patch cords.

In my opinion, it is the best electronics toolbox I’ve ever seen. The compartment layout allows for lots of little parts and some fairly long tools. I could even keep small wire cutters and needle nose pliers in the trays. On top is plenty of room for big equipment where I kept the crimpers and multimeters.

Tackle boxes generally have a bunch of trays that open when you lift the lid, or they have plastic boxes that slide in. You have to remove the box, then open the lid. This one you just slide open drawers to gain access. I loved it.

After purchasing this box, I really wanted another but either Plano stopped making them or they were very hard to come by. In the late 90’s (nearly 15 years later), I stumbled across a clearly old ‘new’ one at a mom&pop sporting goods store. I snapped it up and that became my home toolbox.

After I retired, the work toolbox became my primary toolbox and the newer one contains everything I need to go onsite and work on telephone or CATV wiring. Here is the 1980’s model still going strong: 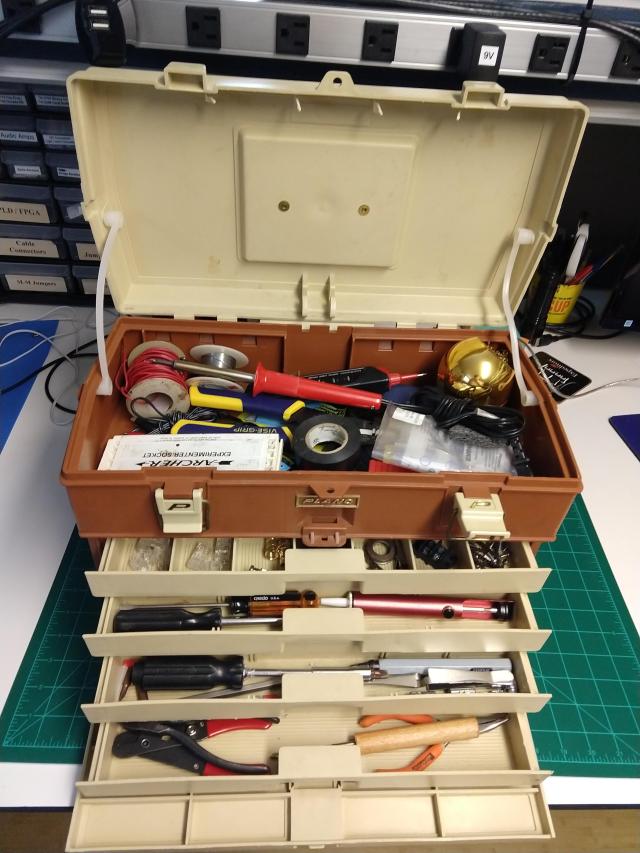 Never saw one again until today (20+ years later). Today I was going thru amazon looking for a small tackle box for first aid supplies and I stumbled across a model 757-004 (I’m guessing revision #4). Here is the Amazon Link.

It is hard to tell if the drawer layout is the same. I tried to locate other pictures of the drawers, but this is the only picture anyone shows in their ad. My version’s lowest drawer has some bigger bins for small tools. This new box also has some bins on top of the lid.

Toolboxes, like work benches, are pretty specific to your own taste, but if you are looking around for an electronics toolbox, I’d say this one is worth a look.

This entry was posted in c-electronics and tagged electronic toolbox, plano 757. Bookmark the permalink.