Building a WIFI antenna from a can has been on the todo list for a while. Besides just wanting to mess with it, I’m thinking it would be handy when traveling with my RV. Quite often RV parks have a single WIFI AP at the office. Unless you are close to the office, you end up walking over to the office to check email.  I’d like to just set a cantenna up pointing at the office.

I primarily used two sources to build my cantenna:

Using the calculator in the reference website above, I determined the antenna ‘element’ was going to need to be 1.65″ from the back of the can. Measured with my caliper and maked the spot.

I used a spade bit to drill the hole in the can of the appropriate size. I wouldn’t say this was the best idea, but nothing else I had was going to work. I went really slow and had the can clamped down tight.

The bulkhead socket was then fitted into the hole: 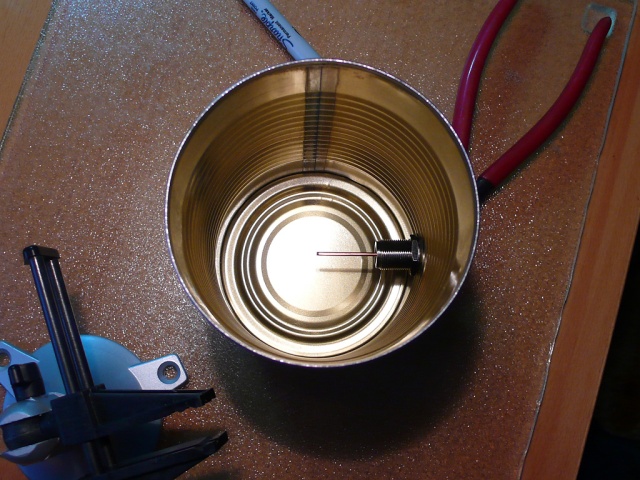 The rest of the parts were assembled quickly:

Success!! Uh, NO. It failed miserably. The only thing I could see was my own AP here in the room beside me. And that I could see if I had no antenna connected at all.

I thought maybe the ebay junk I tend to buy had a problem, but I had continuity all the way to the NIC. Finally I replaced the cantenna with the original whip antenna (connected to the long SMA cable). That failed to. Hmmm, perhaps it was the cable even if it does have continuity. I Connected the NIC directly to the N to SMA converter:

I did a little research and the RG174 cable I’m using has a 20dB loss in 10m. Ouch – that’s way more than the antenna gains, I’m sure. I may eventually use something else such as LMR240. First this needs to prove it is usefull.

While I had initial success, I was a bit disappointed because I couldn’t see any commercial sites few blocks from me like Starbucks. So I played around with other cans.

It turns out the tomato juice can really was about the best solution. I physically tried a smaller stew can, but the calculator said it was going to be way too short and sure enough it did much worse. Every other can I checked in the calculator (a tall pork and bean can, a coffee can, and a pringles can) was going to be too short or clip the signal more than what I have, so I didn’t experiment any further.

I thought it strange the pringles can wasn’t going to work – although it is 9″ long it actually need to be more like 12″ to work right. So I did some research. Turns out the guys turning pringle cans into antennas are making yagi antennas.

I decided against experimenting any further. If the goal is to have something in my RV, it needs to be fairly strong because I will get jammed into a cabinet somewhere. I will work with what I’ve built and see just how well it works in the wild.

Here is the completed cantenna mounted to a light tripod:

How well does it do? Under normal circumstances, my laptop will see about 10 APs in the houses right around me. With the cantenna I slowly (very slowly) scanned the horizon for 360 degrees and picked up 27 APs. Probably 1/4 of them were strong enough to connect to though they all were encrypted so I couldn’t actually try.

A member of Spokane Create loaned me an 18″ WIFI antenna so I decided to sit down and really measure the performance of the Cantenna:

I used Netstumbler to measure the Signal to noise ratio. The graph starts with the TP-Link wireless NIC with NO antenna connected (about -80dDm). I then install the 4″ whip antenna that came with the NIC. SNR went up to about -75dBm. Switching over to the 18″ antenna improved it to -70dBm.

Then I connected the Cantenna. That improved it another 5dBm. Next I rotated the can to the left and right trying to find the ‘sweet spot’. The best SNR I came up with was about -63dBm.

So the Cantenna is better than either of the whip antennas. Not fabulous, but at least it wasn’t worse 🙂

This entry was posted in c-electronics, Cantenna. Bookmark the permalink.

1 Response to Cantenna? Can Do!