Woof Off! – A Device to Control an Out-of-Control Barking Dog

A friend came to me a few months ago asking for help building something to stop his neighbor’s barking dog. I’ve been having the same problem for a few years now, so I was definitely interested.

I’m fortunate enough to have good neighbors, but they are not dog people. In fact, they never really wanted this dog. How they ended up with two dogs is a story not worth going into. But, the upshot is one dog barks, they really have no control over it, and see something like a bark collar as being cruel.

So I have to put up with a dog barking under my office window on a regular basis.

I had looked at some commercial products but just never felt they were going to work for me. So I did nothing. Now that someone else wanted something I had a little more incentive to figure out if ultrasonic sound might really be effective.

There are various circuits on the web that produce an ultrasonic (40kHz) signal. Mine is just a variation of these. I use a 555 timer to produce the signal, then an LM-386 to amplify it.

Some circuits just drive the speaker directly from the 555. I feel like a get a somewhat stronger signal from the LM-386, but not so much that I would say it is an absolute must.

Here is my schematic:

I use terminals to connect power and speakers which show up a little confusingly on the schematic. A diode protects the circuit from reversed polarity. I have found I can drive 2 speakers from the LM386 which effectively nearly doubles the output power so there are terminals for 2 speakers.

This circuit was tested using 12V. It will run on 9V, but the output volume will not be quite as high.

During initial testing of the circuit, I setup the 555 to emit a frequency I could hear, around 12KHz. Once I was ready for real testing, I needed speakers that would actually work at 40KHz. Regular speakers don’t.

I found this ultrasonic speaker on ebay which also has the advantage of being water proof: 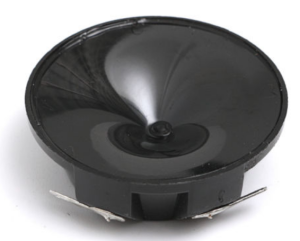 I purchased mine from:

The speaker was installed and the 555 set to produce 40kHz, I could no longer hear the signal. Was it really working? My dogs are not a good test subject as they are both deaf.

I ended up purchasing a set ultrasonic transmitter / receivers like this from Amazon:

I simply clipped my oscilloscope probes to one of the ultrasonic receiver to see how strong the signal was. This allowed me to do comparative testing to see if my output was stronger or weaker.

Once I had what I thought was a functioning unit, I needed to do a field test to see if dogs would really pay any attention to it. I produced a nice clean breadboard unit I could carry around.

I tested this on a handful of dogs. Some hear it, some don’t (or at least pay no attention). The barker most definitely heard it. That gave me the green light to produce a final unit.

Using VeeCad, I converted the schematic into a strip board layout:

See How to use VeeCAD Stripboard Editor with CadSoft Eagle for more information.

I had forgotten how slow it is to build a circuit using stripoard. But it is still cheaper than PCB and way faster than waiting for the PCB to be created and mailed to me. 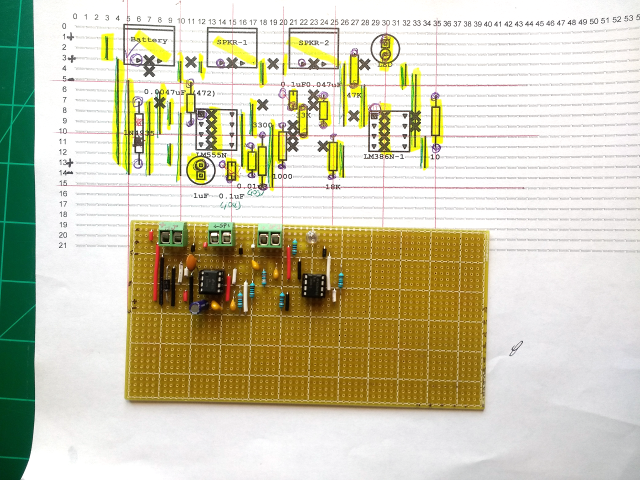 I decided I could mount the unit inside my house and mount the speakers to the window. The ‘barker’ stands about 6′ from this window when she barks. By keeping the electronics inside the house, that solves weather proofing and power issues.

To control this, I wanted a remote control key fob that would work from my office. I purchased a cheap Chinese unit: 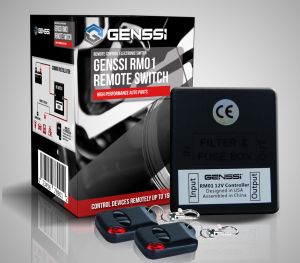 The key fob batteries died IMMEDIATELY (I got around 10 key presses on either fob before it was dead). Irritating, but the vendor credited me the cost of new batteries.

Once the remote was working it was just a matter of cramming it all into a plastic project box and setting up some external jacks and a power LED.

Red Green says duct tape is the handy man’s secret weapon. I say it is Velcro tape and hot glue. Seems like every project ends up using one or both.

The last step was to slap a cheap graphic on the project! 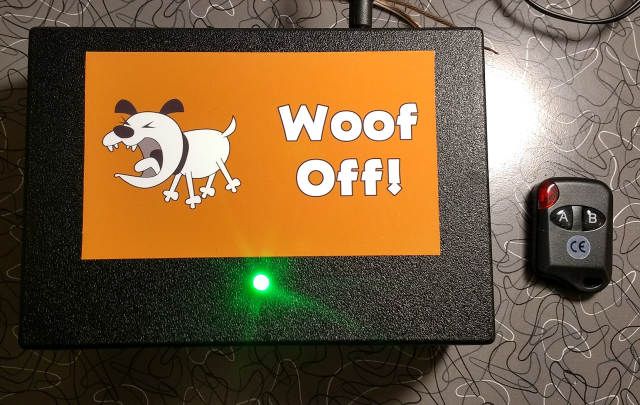 Once the final unit was set up, I watched the dog when I turned the unit on. She would immediately perk up her ears and look directly at it. Even 1/2 way across the neighbor’s yard she could clearly hear it.

One would be tempted to just turn this on and subject the barker continuously to the sound. However good that might feel to you (and I did consider it myself), it is the wrong way to go about getting effective results. Remember: it isn’t the dog’s fault it barks. It is the owner’s fault.

To effectively use Woof Off, you want to use it as a training tool. That’s going to take some time on your part, but you have a better chance of getting good results if you train the dog properly.

During the training period, I kept my key fob with me at all times. The dog is allowed to bark for about 5 seconds (you have to be realistic here – dogs are going to bark, you can’t expect zero tolerance).

If the dog continues to bark after about 5 seconds, I turn Woof Off! on for 10 seconds and switch it back off. And I repeat until the dog finally quits.

Within 3 days of training, the barks became tentative. You could just hear in the tone she wasn’t sure she really wanted to bark.

I’m now about 2 weeks into ‘training’. She still barks some, particularly when people walk by, but having her sit under my window ‘woofing’ every 5 seconds for an hour or more no longer occurs. The situation is back to being reasonable again.

As a follow up to the original project, I successfully trained the barker to the extent that she stayed on the other side of her house and still barked constantly there. Not perfect, but way better than her barking for multiple hours a day under my window. Of course the guy living on that side of the barker’s yard probably wouldn’t agree!

When I tried Woof Off recently after a lapse of probably more than 6 months, the barker didn’t seem to notice it. I suspect that, like humans, has she is getting older she can’t hear high frequencies as well.

This entry was posted in c-electronics and tagged anti bark, Woof Off!. Bookmark the permalink.

12 Responses to Woof Off! – A Device to Control an Out-of-Control Barking Dog